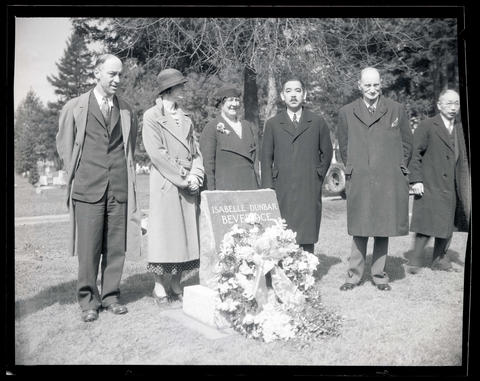 Yōsuke Matsuoka with group at grave of Isabelle Dunbar Beveridge

Photograph showing Japanese diplomat Yōsuke Matsuoka (second from right) standing in a row with four other people at the grave of Isabelle Dunbar Beveridge at Lone Fir Cemetery in Portland on Sunday, April 9, 1933. Standing on either side of Matsuoka are two of Beveridge’s relatives, Jean Dunbar McIntyre (center) and James S. Dunbar (right). The man and woman at left are unidentified. Matsuoka, who had lived with Beveridge in Portland during his youth, provided the granite marker shown in this photograph and placed it at Beveridge’s gravesite during a brief visit in April 1933. Matsuoka, leader of the Japanese delegation to the League of Nations, stopped in Portland on his way back to Japan after his delegation’s withdrawal from the league in February 1933. A related photograph, image No. 371N0218, and a story about Matsuoka’s tribute to Beveridge were published on Page 16 of the Oregon Journal on Monday, April 10, 1933. The story, headlined “Nippon Leader Pays Honor to Benefactress,” reported that Matsuoka first arrived in Portland in 1893, at age 13, and was living in a Methodist Church dormitory when he met Beveridge, who took him into her home. See related image Nos. 371N0219, 371N0221, and 371N3037. Also see image Nos. 371N1641 and 371N1642, taken earlier in Matsuoka’s visit.