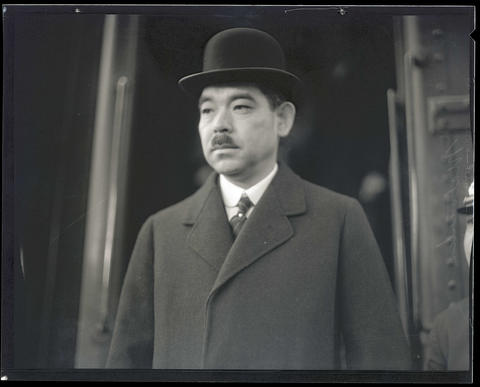 Photograph showing Yōsuke Matsuoka standing next to a train car on Friday, April 7, 1933, probably at Union Station after his arrival in Portland. Matsuoka, who had led the Japanese delegation to the League of Nations, was on his way back to Japan from Geneva following his delegation’s withdrawal from the league in February 1933. A related image, No. 371N1641, and a story about his arrival were published on Page 1 of the Oregon Journal on April 7, 1933. The story, headlined “Matsuoka Comes Back As Diplomat,” reported that in his youth, Matsuoka had lived in Portland twice; he first arrived in 1893 and later attended the University of Oregon Law School. Also see image Nos. 371N0218, 371N0219, 371N0220, 371N0221, and 371N3037, taken later in Matsuoka’s visit to Portland. Image note: The name “Matsuoka” is written on the negative and is visible on the right side of the image.