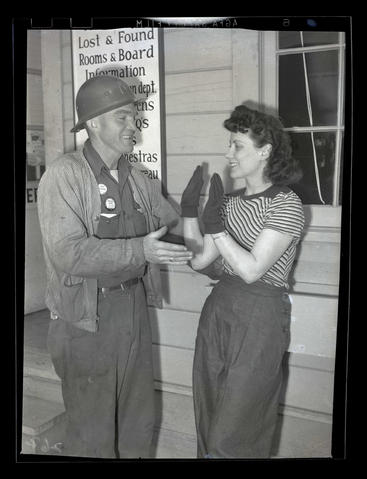 Photograph showing two workers, Mel Knotts and Jeannine Christensen posing at the Albina Engine & Machine Works shipyard in Portland. They are facing each other and smiling, and Christensen is holding up both hands. A cropped version of this photograph and image Nos. 375A0406 and 375A0742 were publishd on Page 1, Section 3 of the Oregon Journal on Sunday, July 4, 1943. This photograph had the following caption: “NO WORK, NO WOO is the battle cry of girls at Albina Hellshipyard, who have sworn to date only those boys who put in a full week’s work. Here, Jeanine [sic] Christensen, Albina burner and president of N. W. N. W., remains adamant to the entreaties of Plate Shop Foreman Mel Knotts.” The photographs accompanied a story headlined “No Work, No Woo / Albina Girls Won’t Date Absentees.” Image note: The number 262 is written on the negative and is visible in the lower left corner of the image. The text “Albina shipbuilding” is written on the negative sleeve.