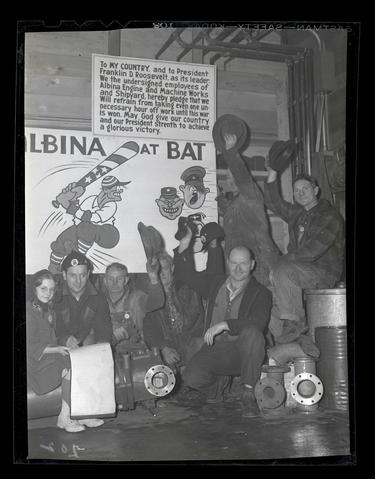 Photograph showing a group of unidentified workers posing with a pair of signs and doffing their hats at the Albina Engine & Machine Works shipyard in Portland. The photograph was taken as Albina workers began signing a pledge against absenteeism in February 1943. At left, a girl, Nancy Vincent, is holding a large notebook for one of the workers to sign. Behind the workers are two signs. The larger sign has the words “ALBINA AT BAT” at top, and it shows a baseball player preparing to swing at three caricatures depicting the heads of Hideki Tōjō, Adolf Hitler, and Benito Mussolini. The second sign reads: “To MY COUNTRY, and to President Franklin D. Roosevelt, as its leader: We the undersigned employees of Albina Engine and Machine Works and Shipyard, hereby pledge that we Will refrain from taking even one unnecessary hour off work until this war is won. May God give our country and our President strenth [sic] to achieve a glorious victory.” Also see image Nos. 375A0623, 375A0677, 375A0679, and 375A0681. Image note: The number 202 is written on the negative and is visible in the lower right corner of the image. The text “Albina shipbuilding” is written on the negative sleeve.