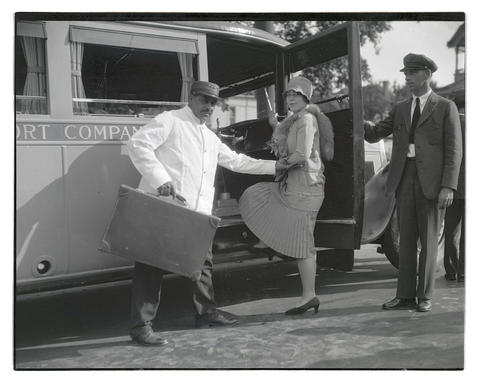 Photograph of Helen Hawkins and two unidentified men at the open door of a bus. Hawkins is poised to step onto the bus as the man at left, possibly a steward, holds her elbow with one hand and a suitcase in the other hand. The man at right, possibly the bus driver, is holding the door of the bus. The photograph was taken in Portland on September 19, 1927, after a ceremony celebrating the launch of the Southern Pacific company’s new bus service to the Willamette Valley. Hawkins performed a christening of one of the new buses. The Oregon Journal published a short story about the ceremony, headlined “New Bus Line is Christened in Portland,” on Page 2 of its September 19, 1927 city edition. The Oregonian newspaper, which published a story on September 20, 1927, reported that after the ceremony, city council members and Southern Pacific office staff took a short ride around Portland on the new buses. See related image Nos. 371N0115, 371N0116, 371N0117, 371N5111, and 371N5112.