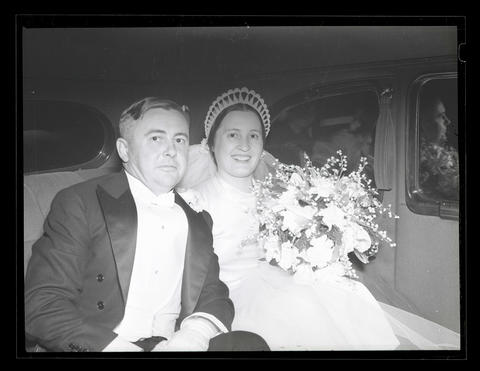 Photograph showing Portland Mayor Joseph K. Carson and Myrtle Cradick in a car on their wedding day, Saturday, June 19, 1937. The ceremony was held at the First Baptist Church (also known as the White Temple) in Portland. A cropped version of this photograph and image No. 372A0107 were published on Page 3 of the Oregon Journal on Sunday, June 20, 1937, under the headline “—And May They Live Happily Ever After.” This photograph had the following caption: “Mr. and Mrs. Carson in their automobile following the ceremony.” In addition to the photographs on Page 3, the Journal published two pictures and a story on the June 20 front page. See additional related image Nos. 372A0108, 372A0109, 372A0111, 372A0112, and 372A0113.