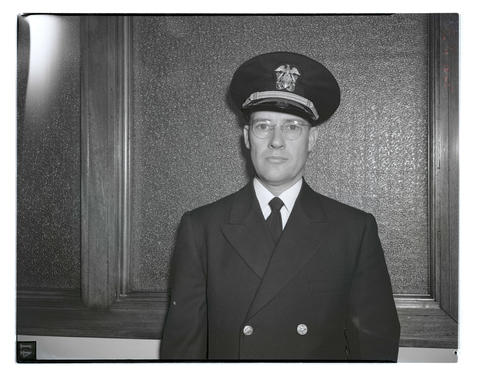 Head and shoulders portrait of Webster Jones facing front. He is wearing glasses and a U. S. Navy uniform. The number 2633 is written on the negative and is visible in the upper right corner of the image. A cropped version of this photograph was published in the Oregon Journal on Page 8, Section 2, of the Oregon Journal on November 22, 1942. The photograph was published with a story headlined “Ex-Newsman Gets Navy Order To Active Duty.” The story reported that Jones, a lieutenant in the naval reserve and a member of the advertising staff at the Portland Gas & Coke Company and Northwestern Electric, had been called to active duty. The story also reported that Jones had previously been a staff member at the Oregonian newspaper in Portland. See related image Nos. 375A0845, 375A0846, 375A0848, 375A0849, and 375A0850. Image note: Light leak on negative. The name “Webster Jones” is written on the negative sleeve.