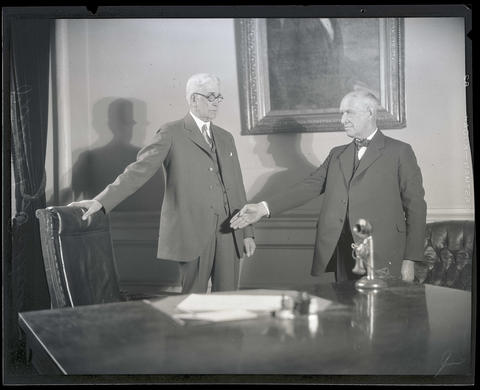 Portrait of incoming governor Isaac L. Patterson (left) and outgoing governor Walter M. Pierce standing next to the desk in the governor’s office at the Oregon State Capitol in January 1927. Patterson has one hand on the back of the desk chair, and Pierce is gesturing toward the chair. A cropped version of this photograph was one of five, including image No. 371N1968, that were published on Page 22 of the Oregon Journal on Tuesday, January 11, 1927, the day after Patterson’s inauguration. The photographs were published under the headline “With the Preliminaries Concluded.” This photograph had the following caption: “Ex-Governor Pierce bids his successor, Governor Patterson, be seated.” See additional related image Nos. 371N1959, 371N1961, 371N1964, 371N1966, and 371N1969. Image note: The text “Pierce + Patterson” is written on the negative and is faintly visible on the left side of the image.