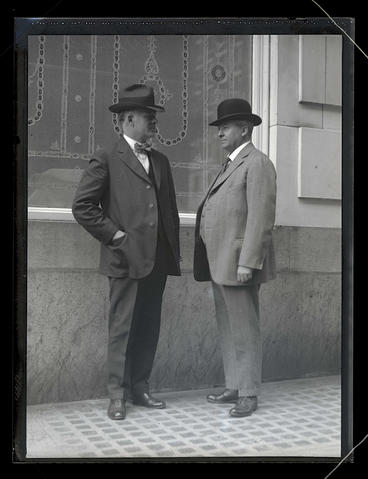 Full-length portrait of two men, both wearing suits, hats, and ties, standing on the sidewalk outside the Imperial Hotel in Portland on Saturday, April 10, 1920. That day, a nearly identical photograph, image No. 376G0376, was published on the front page of the Oregon Journal city edition under the headline “Union Officials Here to Combat Strike.” The photograph had the following caption: “Two prominent officials of the trainmen’s organizations, who are in Portland doing their best to bring about a speedy settlement of the ‘rebel’ strike which has broken out among the switchmen. They are: Left, W. J. Babe, national deputy vice president of the Brotherhood of Railway [sic] Trainmen, and right, F. D. Hobbs, general chairman of the Brotherhood of Railway Trainmen of the O-W. R & N. [Oregon-Washington Railroad and Navigation Company] system, photographed by The Journal staff photographer today at their headquarters in the Imperial hotel.” The photograph accompanied a story headlined “Brotherhood Official Says Use Lever Act To Defeat Radicals.” The story was one of four front-page articles about the strike, which was occurring in cities around the United States. See additional related image No. 376G0374. Image note: On the negative, the name “W. J. Babe” is written above the man at left, and the name “Hobb [sic]” is written above the man at right.