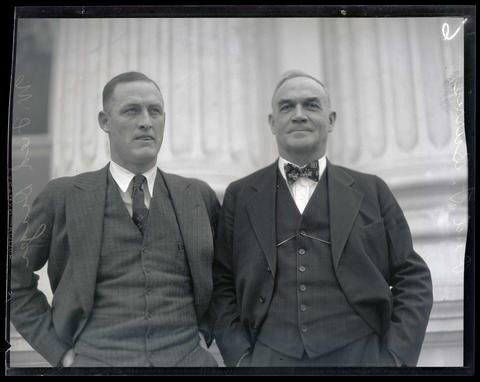 Half-length portrait of Paul F. Burris (left) and W. Fred Drager standing side by side outside the Oregon State Capitol in Salem and facing front. This photograph was published on Page 1 of the Oregon Journal on January 14, 1929. It was cropped into two separate pictures, one of each man. The photographs, along with image Nos. 371N1676 and 371N1970, were published under the headline "At the Opening of the Oregon Legislature." The four photographs had the following caption: “Staff Photographer Ralph Vincent of The Journal was on hand at the state capitol this morning and brought back for you some of the interesting personages there.” This photograph had the following additional caption information: “Paul G. [sic] Burris and Fred Draper [sic], rival candidates for clerkship of the house.” The photographs accompanied a story, titled "Legislature Organizes For Session.” Image note: The names “W. Fred Drager” and “Paul F. Burris” are written on the negative. The number 6 is also written on the negative. The writing is visible in the image.