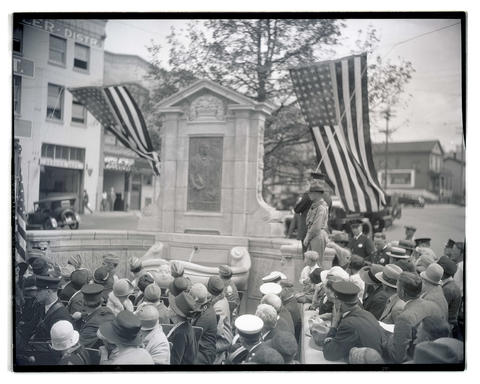 Photograph showing a crowd of seated people at the memorial to Portland Fire Chief David Campbell during the monument’s unveiling on Thursday, June 28, 1928. The memorial is between Southwest Alder Street and Southwest 18th and 19th avenues. Campbell was killed on June 26, 1911, while fighting a fire at the Union Oil distribution plant. A cropped version of this photograph was published on Page 2 of the Oregon Journal on Friday, June 29, 1928, under the headline “Statue Unveiled to City’s Firemen Dead.” The photograph had the following caption: “Cenotaph’s formal presentation to the city marks exact hour of 17 years ago when Fire Chief David Campbell was buried. This memorial at 19th and Washington streets [sic], is a tribute to him and all firemen who have died in line of duty.” The photograph accompanied a story headlined “Myrtyred [sic] Chief Honored; Statue to Him Unveiled.”