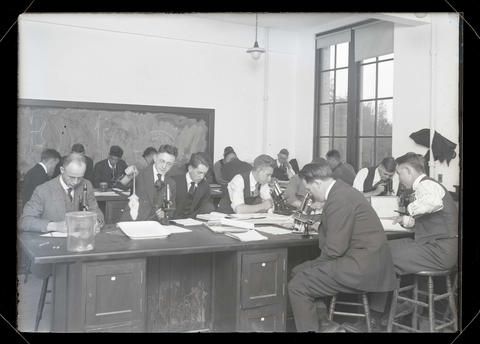 Photograph showing young men working at long tables in the freshman study room at the new University of Oregon Medical School building on Marquam Hill in Portland in October 1919. The second young man from left is holding up a rat by the tail; others are looking into microscopes. A cropped version of this photograph was one of five published on Page 16, Section 2, of the Oregon Journal on Sunday, October 19, 1919. The photographs were published under the headline “Dream of Great Medical Center Near Realization.” The photographs had the following caption: “Combined University of Oregon medical school and Multnomah county hospital is making rapid strides.” This photograph had the additional caption: “Scene in freshman study room, with a rat as exhibit ‘A.’ ” The pictures accompanied a story, which had the headline “Dr. MacKenzie’s Dream Bids Fair to Become True” and the subheadings “Concrete Plans Are Shaping for Building of Medical Center Planned by Dean of U. of O. / Some Money Now Promised / New Structure of Medical School on Marquam Hill Above Terwilliger Boulevard, Is Nucleus.” See related image Nos. 376G0333 and 376G0335. Image note: The text “Medical school” is written on the negative sleeve.