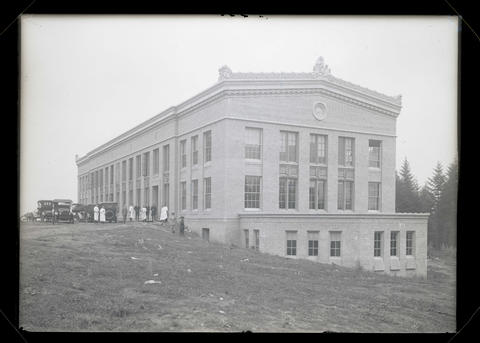 Photograph showing the exterior of the three-story University of Oregon Medical School building on Marquam Hill in Portland in October 1919. A group of people and cars are outside the building at left. A cropped version of this photograph was one of five published on Page 16, Section 2, of the Oregon Journal on Sunday, October 19, 1919. The photographs were published under the headline “Dream of Great Medical Center Near Realization.” The photographs had the following caption: “Combined University of Oregon medical school and Multnomah county hospital is making rapid strides.” This photograph had the additional caption: “Medical school building, first completed unit of proposed group.” The pictures accompanied a story, which had the headline “Dr. MacKenzie’s Dream Bids Fair to Become True” and the subheadings “Concrete Plans Are Shaping for Building of Medical Center Planned by Dean of U. of O. / Some Money Now Promised / New Structure of Medical School on Marquam Hill Above Terwilliger Boulevard, Is Nucleus.” See related image Nos. 376G0334 and 376G0335. Image note: The text “Medical school” is written on the negative sleeve.