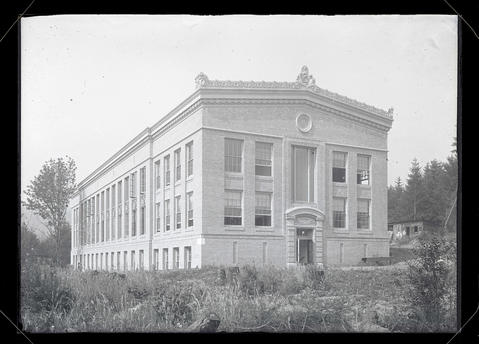 Photograph showing the exterior of the three-story University of Oregon Medical School building on Marquam Hill in Portland in July 1919. A cropped version of this photograph was published on Page 7, Section 2, of the Oregon Journal on Sunday, July 20, 1919, under the headline “U. of O. Medical School.” The photograph had the following caption: “ First building on University of Oregon medical school’s new campus, on Marquam hill.” The photograph accompanied a story with the headline “Medical School of U. Of O. To Be Big Asset To City” and the subheadings “Opening of New Structure on Marquam Hill Will Take Place This Coming October 1. / Portland Will Be Center / Result of Expanding of Great Institution Will Make This City Headquarters in Northwest.” Image note: The text “Medical school” is written on the negative sleeve.