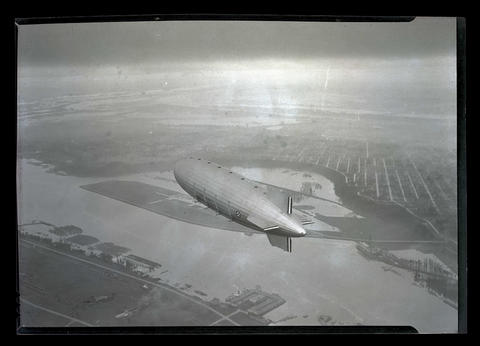 Aerial photograph of the United States Navy dirigible Akron in flight above Portland on May 24, 1932. A cropped version of this photograph was published on Page 4 of the Oregon Journal on May 24, 1932, under the headline “U. S. S. Akron, Early Morning Visitor Here, Flying Over Swan Island.” The photograph had the following caption: “Roy Norr, Journal staff photographer, in an airplane flown by Tex Rankin, caught the giant naval dirigible, U. S. S. Akron, as she poked her nose over Swan Island airport. The great aircraft gave Portlanders a thrill as she flew directly over the city, but they saw her under body only. The Akron is 785 feet long, weighs 403,000 pounds, and has 6,300,000 cubic feet gas volume. The ship has eight motors, totaling 4480 horsepower, and can make 83.8 miles an hour at top speed.” The photograph accompanied the continuation of a front-page story about the Akron’s visit. Image note: Photograph shows discoloration due to negative damage.