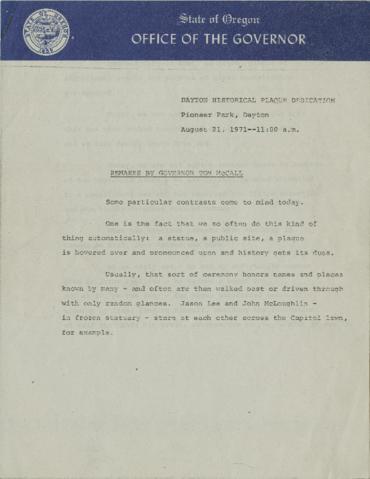 Thomas Lawson McCall was Oregon's progressive Republican governor from 1967 to 1975. He was born March 22, 1913, in Egypt, Massachusetts and moved with his parents to Portland in 1909 and soon after to a ranch near Prineville. He graduated in journalism from the University of Oregon in 1936, and went on to work at newspapers in Moscow, Idaho, and at the Oregonian in Portland. He married Audrey Owen in 1939, and the couple had two sons. He served as a war correspondent in the U.S. Navy during World War II, then worked in broadcasting until 1964, hosting a radio talk show on Portland's station KEX. He became involved in politics as early as 1949, when he worked as Governor Thomas McKay's assistant. Although losing a senatorial seat to Edith Green in 1954, he served as Secretary of State from 1965-1967. He was elected for two terms to the governorship and served with great popularity between 1967 and 1975. His administration was known for its attention to public concerns and the quality of life in the state. He promoted strong land use laws, environmental regulations, and sought, unsuccessfully, to limit growth. After leaving office he returned to broadcast journalism and continued his environmental advocacy. In 1978 he was defeated in a bid for the governorship by Victor Atiyeh. McCall died in 1983.