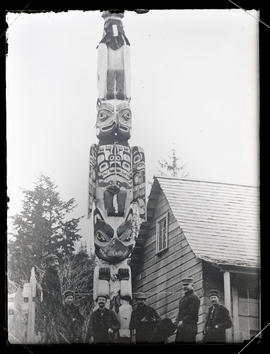 An unidentified group of men standing against a totem pole (Alaska?). 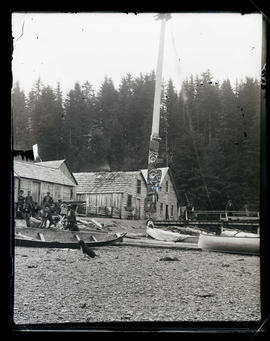 A dog sitting beside canoes pulled onto a gravel shore in an Alaskan village. Several unidentified people are visible in front of wooden buildings in the background. A tall totem pole is erected in front of the buildings. 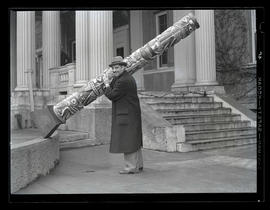 Full-length portrait of a smiling man, probably Emil Piluso, standing outside the Multnomah Amateur Athletic Club in Portland (now the Multnomah Athletic Club). He is holding a large carved wooden pole against his shoulder, with the base resting on a low wall in front of him. He is wearing a hat and overcoat. The totem pole was the trophy in a series of annual competitions between MAAC and the Washington Athletic Club in Seattle. The competitions began in the mid-1930s and continued until World War II. Image note: The name “Piluso” is written on the negative and is visible in the lower right corner of the image.