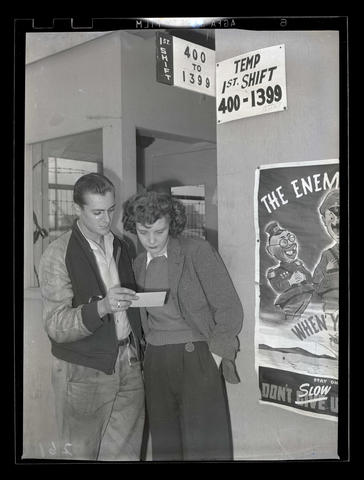 Photograph showing Gene Peterson showing his time card to Thelma Leonard at the Albina Engine & Machine Works shipyard in Portland. Leonard had taken a “No Work, No Woo” pledge, a campaign by Albina workers to reduce absenteeism. Participants pledged not to date workers who hadn’t put in a full week’s time. A cropped version of this photograph and image Nos. 375A0406 and 375A0742 were publishd on Page 1, Section 3 of the Oregon Journal on Sunday, July 4, 1943. This photograph had the following caption: “SWORN TO TURN A DEAF EAR to masculine blandishments, unless accompanied by a full time card, Thelma Leonard, shipfitter’s helper and vice president of No Work No Woo, looks appraisingly at the time card of Gene Peterson of the plate shop.” The photographs accompanied a story headlined “No Work, No Woo / Albina Girls Won’t Date Absentees.” The number 261 is written on the negative and is visible in the lower left corner of the image. The text “Albina shipbuilding” is written on the negative sleeve.