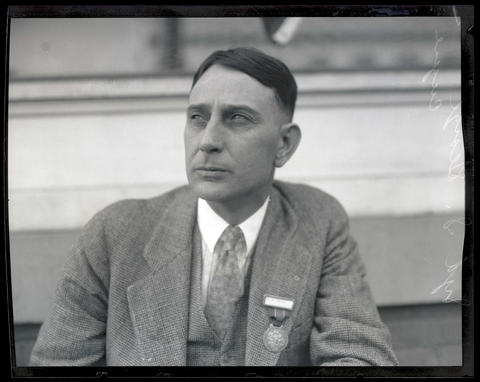 Head and shoulders portrait of a man, Syd S. George of Eugene, facing front and looking toward the left. He is wearing a suit jacket and vest, a collared shirt, and a tie. The photograph was taken in August 1929 in Salem, Oregon, during the state American Legion convention. The name “Syd S. George” is written on the negative, and the word “Eugene” is written just below it. The writing is visible on the right side of the image. See related image Nos. 371N0841, 371N0892, 371N0916, 371N1702, and 371N2685.

Updated with additional information and moved from People, Surname E-G, subseries to Organizations series on January 3, 2019.