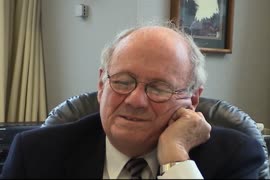 Donal Dennis Sullivan was born in St. Louis, Missouri, in 1931. He attended Loyola University, the Illinois Institute of Technology, and DePaul University Law School. He clerked for Judge Hall Lusk in 1959. He became a deputy district attorney of Multnomah County in 1960; was an assistant attorney general from 1960 to 1962; was an assistant U.S. Attorney from 1962 to 1965; was a clerk of U.S. District Court of Oregon from 1965 to 1969; and became an Appointed Referee in Bankruptcy in 1969. He became a judge in 1979 and was appointed to his first 14-year term to the U.S. Bankruptcy Court in Portland, Oregon, in September 1986. He was recalled in January 1999. He died in 2009.

This oral history interview with Donal D. Sullivan was conducted by Michael O'Rourke in Sullivan's chambers at the U.S. Bankruptcy Court in Portland, Oregon, on July 6, 2006. In the interview, Sullivan discusses his early career as a lawyer in Salem, and as assistant district attorney with Sid Lezak in the Multnomah County district attorney's office in Portland, then as a clerk for the U.S. District Court of Oregon. He describes working with judges Gus Solomon and William East. Sullivan also talks about serving as a bankruptcy judge. He closes the interview by talking about his personal life and family.

Collection is open for research.