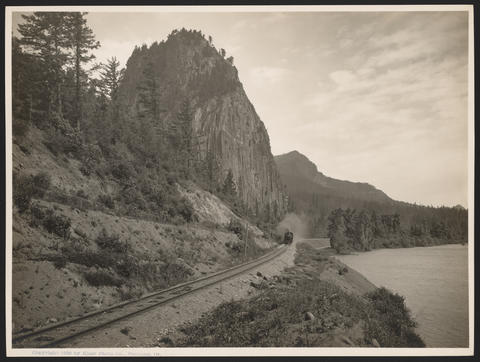 Photograph of an SP&S locomotive pulling a train past Beacon Rock on the Washington side of the Columbia River Gorge. Taken from the side of the railroad track, the locomotive travels toward the camera. The Columbia River is on the right. Handwriting on the back of the print reads, "Beacon Rock, Washington, Cascade Range, Columbia River, S.P.&S. Ry." Second handwritten note reads, "Mrs. Crozier." Stamps on the front and back of the print indicate a 1909 copyright by Kiser Photo Co. for SP&S Railway.