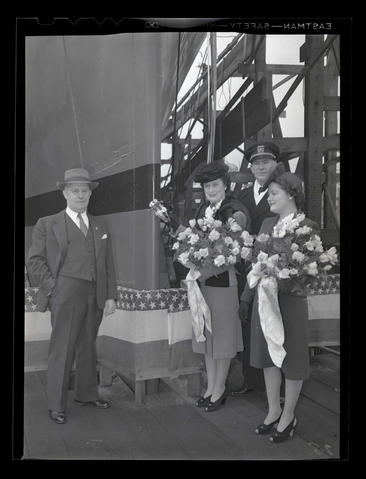 Photograph showing (from left) George Rodgers, president of Albina Engine & Machine Works; his sister, Lillian Person; his niece Mae Magill; and an unidentified U. S. Navy serviceman posing in front of a ship during a launching ceremony at the Albina Engine shipyard in Portland. The ceremony to launch the submarine chaser PC-867, known as Hell Hound, was held on December 3, 1942. Pearson, who christened the ship, is holding a bottle wrapped in ribbon, and both she and Magill are carrying large bouquets. A story about the launching ceremony, headlined “’Hellship’ Launched; Another Keel Laid,” was published on Page 1 of the Oregon Journal’s final edition on December 3, 1942. Image note: The number 75 is written on the negative and is visible in the lower right corner of the image. The text “Albina shipbuilding / Launching / 12/3/42” is written on the negative sleeve. See related image Nos. 375A0413, 375A0415, and 375A0656.