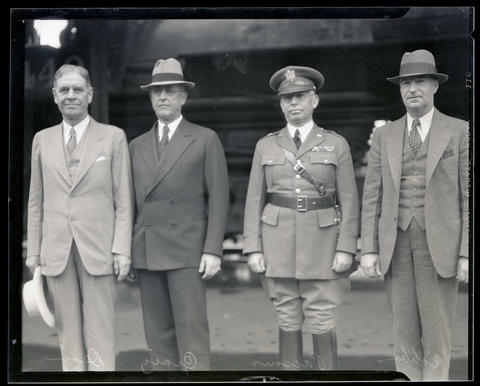 Three-quarters portrait of four men standing in a row. From left are Secretary of War George Henry Dern, Major General Malin Craig, Brigadier General James Kelly Parsons, and a man identified on the negative as “Robbins.” The photograph was taken in Portland on August 2, 1934. Dern and Craig were in Portland for a visit by President Franklin D. Roosevelt. The surname of each man in the photograph is written at the bottom of the negative and is visible in the image. See related image Nos. 371N0609, 371N0610, and 371N0684.

Moved from subseries People, Groups, to subseries Politics and government, Federal, on March 21, 2019.