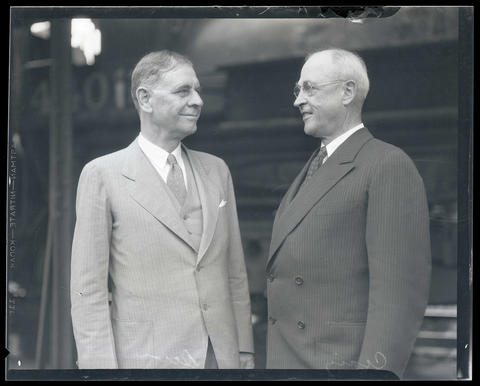 Half-length portrait of Secretary of War George Henry Dern (left) and Major General Malin Craig facing one another other. This photograph was taken in Portland on August 2, 1934, and published on Page 4 of the Oregon Journal on Friday, August 3, 1934, with the following caption: “George Henry Dern, left, secretary of war in President Roosevelt’s cabinet, and Major General Malin Craig, commanding the army’s Ninth corps area, with headquarters at San Francisco, who arrived Thursday afternoon to meet their commander-in-chief upon his arrival aboard the U. S. S. Houston.” The name “Dern” is written on the negative below the man on the left, and the name “Craig” is written below the man on the right. The writing is visible at the bottom of the image. See related image Nos. 371N0610, 371N0611, and 371N0684.

Moved from subseries People, Groups, to subseries Politics and government, Federal, on March 21, 2019.