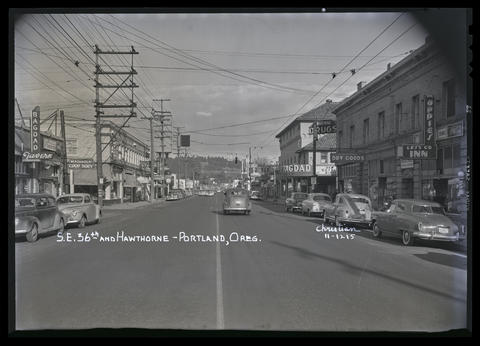 Negative of a photographic postcard showing SE Hawthorne Street in Portland, Oregon. Taken from the middle of the street at SE 36th and Hawthorne, the view looks east up Hawthorne Street toward Mount Tabor in the background. Businesses line both sides of the street and there are signs for the Bagdad Theater, Marigold Chop Suey, the Bagdad Tavern, and more. Automobiles are parked along the street and a few drive in the road. Handwriting on negative reads, "S.E. 36th and Hawthorne - Portland, Oreg. Christian 11-1215."