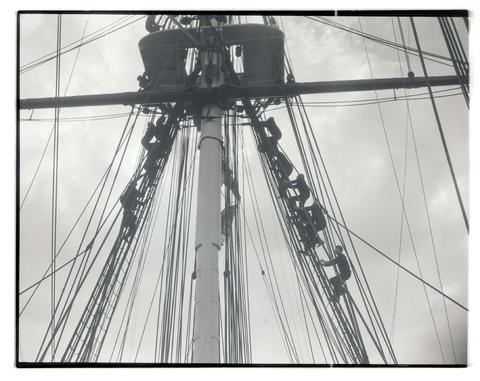 Photograph showing sailors on the USS Constitution climbing ladders toward a platform on the mizzenmast in August 1933. The photograph was taken while the frigate and crew were in Portland from August 2 to August 22, 1933, as part of a national tour. The photograph may have been taken on August 18, 1933, when sailors on the Constitution set sails on the mizzenmast. A similar photograph was published on the front page of the Oregon Journal on August 19, 1933, along with image No. 371N3711 and a story headlined “Landlubbers See Frigate Unfurl Sails.”