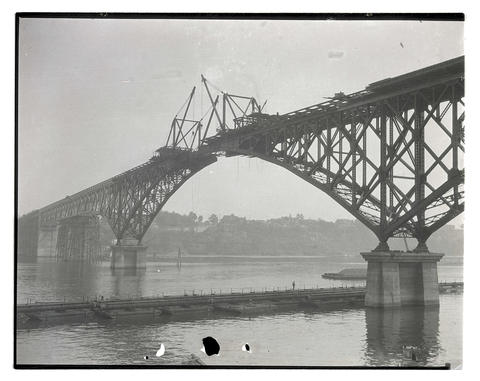 Photograph of the Ross Island Bridge in Portland during construction. This photograph was published on Page 20 of the Oregon Journal on September 14, 1926, under the headline “Ross Island Bridge Steel Spans River.” The photograph had the following caption: “The great center arch span of the new Ross Island bridge, third and last of Portland’s bridge program, was linked yesterday when derricks swung into place the girders that closed the gap. Above is a view of this arch, one of the longest bridges anywhere, as it looked when this girder was dropped into position.” Also see image Nos. 371N5074, 371N5075, 371N5077, and 371N5078, showing the lifting and placement of the girder that joined the bridge’s center arch. Image note: Negative damage at bottom of image.