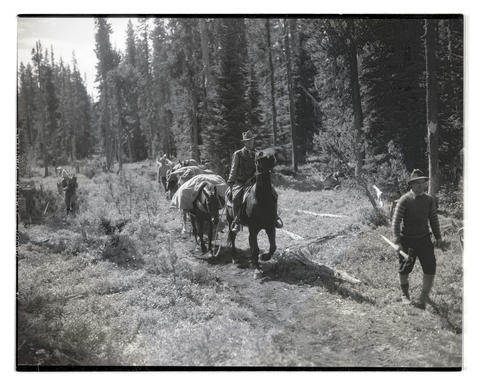 Photograph showing Rex Wilson of the U. S. Forest Service riding at the front of a pack train carrying the bodies of Portland climbers Donald Burkhart, Davis McCamant, and John Thomas on Saturday, September 9, 1933, after searchers recovered their remains. The three men died in an accident during an attempt to ascend Mount Jefferson on Monday, September 4. Their bodies were transported 10 miles by pack train from the mountain to Olallie Lake. The Oregon Journal published a story about the recovery effort, along with related image Nos. 374N0486 and 3740491, on Sunday, September 10, 1933. Also see image Nos. 374N0484, 374N0485, and 374N0511. Image note: Photograph shows discoloration due to deterioration of the negative.