Rat in trap at Admiral terminal in Portland 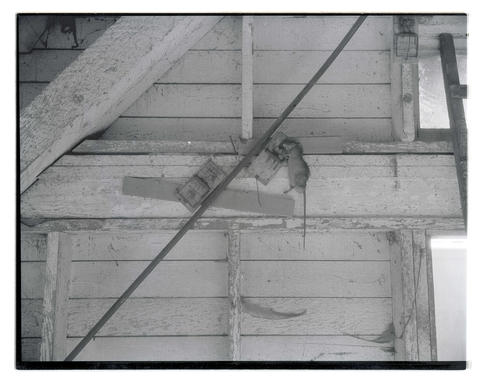 Rat in trap at Admiral terminal in Portland

Photograph of a rat in a trap on a wall. A similar photograph was published on Page 8, section 6, of the Oregon Journal on Sunday, October 24, 1926. The version printed in the Journal was published with two others under the headline "War Progresses on the Front,” and had the following caption: “But the front is the waterfront. Top--Big black rat caught in an ingeniously placed trap along a water line at the Admiral terminal." The published photograph accompanied a story with the headline: "Terminal Rats Easy Prey of Expert's Trap." The story described how a man named Daniel Lake had successfully reduced the rat population at the Pacific Steamship company’s Admiral terminal on the Portland waterfront. Image note: Photograph shows discoloration due to deterioration of the negative.