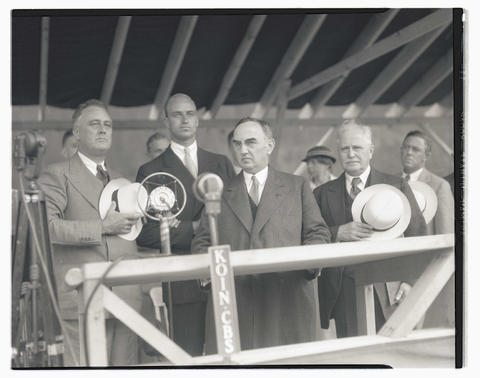 Photograph of (from left) President Franklin D. Roosevelt; the president’s son James Roosevelt; Oregon Governor Julius L. Meier; and Oregon congressman Charles H. Martin on the speaker’s stand at the Bonneville dam construction site on August 3, 1934, before the president delivered an address about the dam project. A cropped version of this photograph was one of six that were published on Page 5 of the Oregon Journal on August 4, 1934. This photograph had the following caption: “President Roosevelt, his son, James; Governor Meier and General Charles H. Martin standing at attention as Seventh infantry band played the national anthem, opening the program at the Bonneville dam site Friday afternoon. In his address the president revealed the plans he has in mind for future development of the Columbia, including sea locks at dam to permit passage of ocean-going ships as far as The Dalles. The program contemplates barge service in the upper river from the great wheat-producing sections of Eastern Oregon and Washington and Northern Idaho.” The photograph was part of a two-page photo spread included in the newspaper’s coverage of President Roosevelt’s visit. See related image Nos. 371N2168, 371N21769, 371N2170, 371N2171, 371N2172, 371N2173, 371N2174, 371N2190, 371N2192, 371N2193, 371N2195, 371N2197, and 372A1257. Also see image No. 371N2186 of crowds touring the ship on which the president arrived in Portland.