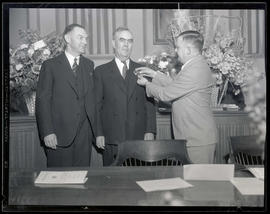 Photograph showing new Portland Mayor Joseph K. Carson pinning the police chief’s badge on Burton K. Lawson’s lapel as an unidentified man watches. The photograph was taken in the city council chambers on Saturday, July 1, 1933, when Carson and Lawson were sworn in. A cropped version of this photograph was one of two that were published on the front page of the Oregon Journal on July 1, 1933, under the headline “Joseph K. Carson Jr. Becomes Mayor.” The photograph had the following caption: “Carson pins chief’s star on on Lawson.” See related image Nos. 371N0453, 371N0459, 371N0467, and 371N0469. 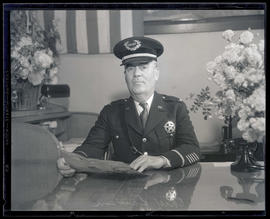 Head and shoulders portrait of Portland Police Chief Burton K. Lawson sitting at a desk, holding a document, and facing front. He is in uniform. Lawson was police chief from July 1, 1933, to November 11, 1934. The text “Chief Lawson” is written on the negative and is visible at the bottom of the image.