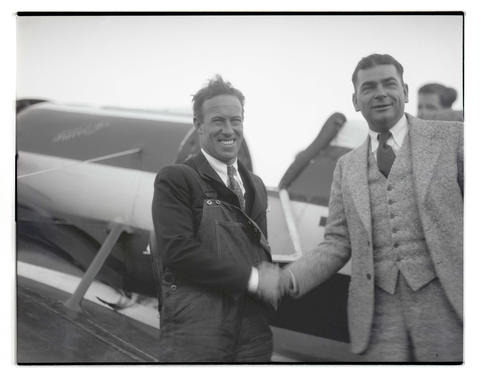 Photograph showing pilot Frank M. Hawks smiling as he shakes hands with pilot Tex Rankin at Swan Island airport in Portland on Saturday, November 28, 1931. In the background is Hawks’ plane. The photograph was taken after Hawks arrived from San Francisco for a brief stay in Portland. A cropped version of this photograph was one of three that were published on Page 3 of the Oregon Journal’s city edition on Sunday, November 29, 1931. The photographs were published under the headline “Three Hours From San Francisco.” They had the caption: “Captain Frank M. Hawks said his exact time from San Francisco to Portland Saturday was three hours and five minutes. But at that, he wasn’t trying for speed—just jogging along.” This photograph had the following additional caption information: “Hawks and his big smile.” The photographs accompanied the continuation of a front-page story about Hawks. Also see image Nos. 374N0276 and 374N0278, which were published with this photograph, and image No. 374N0300.