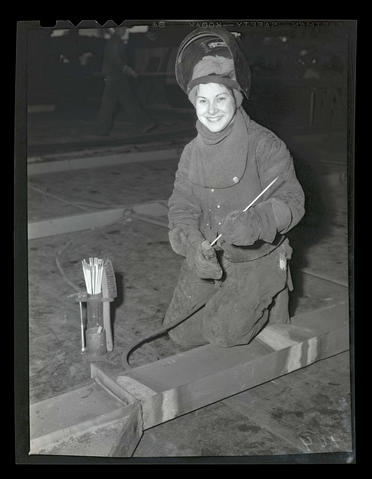 Photograph showing welder Pat Mulligan at the Albina Engine & Machine Works shipyard in Portland. She is kneeling next to a metal structure, facing slightly left, and smiling. She is wearing a welder’s mask on her head and heavy clothing. The number 164 is written on the negative and is visible in the lower right corner of the image. A cropped version of this photograph was published on Page 1, Section 3, of the Oregon Journal on Sunday, June 6, 1943. The picture was part of a multi-photo spread headlined “Northwest Women Aid War on Every Front.” This photograph had the following caption: “HERE’S A SERVICE MAN’S WIFE who welds Hellships as her lick at the Axis. She’s Albina’s Pat Mulligan, whose Irish songs and Irish eyes have the sparkle of a well struck arc.” Also see image No. 375A0628. Image note: The text “Albina shipbuilding” is written on the negative sleeve.