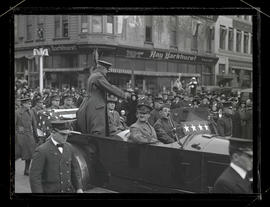 Photograph showing General John J. Pershing standing in the back of a car and waving to the crowd at Sixth and Stark during a parade in Portland on Sunday, January 18, 1920. Pershing stopped in Portland during a tour to inspect military bases around the United States. A cropped version of this photograph, along with image Nos. 373G0154, 373G0156, 373G0160, and 373G0323, was one of seven published on the front page of the Oregon Journal on January 19, 1920, under the headline “A ‘Moving Picture’ of General Pershing’s Day in Portland From His Welcome at Train to His Farewell.” The caption for this photograph described Pershing as “standing to reply to the cheers of the crowds that lined the route.” Also see image Nos. 373G0155, 373G0157, 373G0158, and 373G0159. 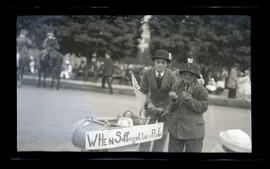 Costumed boys in parade? with baby carriage and ‘When Suffragettes Rule’ sign

Photograph of two unidentified boys posing with a baby carriage. A doll is lying in the carriage, and on the side of the carriage is a sign that reads, “When Suffragettes Rule.” The boys are in costume with painted faces (the boy on the right may be in blackface) and may be marching in a parade. 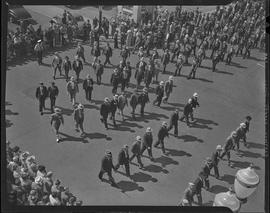 Photograph taken from above, showing people walking in a parade. Wearing suits and hats, the men walk in rows down a paved street. People are lined up and watching behind a rope fence (negative 5 of 17). 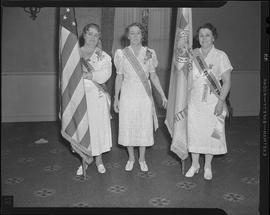 Women with sashes and flag at Spanish War veterans gathering

Three women wearing sashes and ribbons stand with flags in front of a window. Two of the women are wearing flowers pinned to their dresses. The two outer women wear sashes with “National Presidents’ [Pageant?]” written on them, and also “New York” and “New Jersey” ribbons (negative 3 of 17). 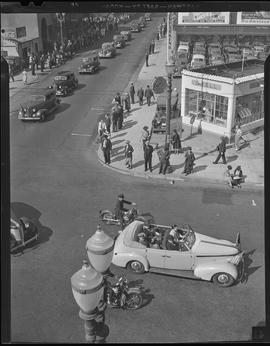 Photograph taken from above, showing cars in a parade. At the bottom of the frame, a car is flanked on two sides by police motorcycles. Next to the street is a “Shell” station, with people standing on the sidewalk (negative 9 of 17). 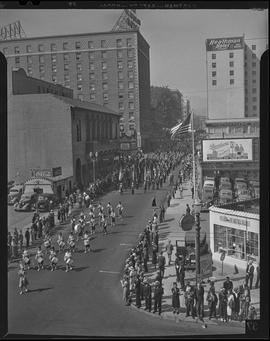 Photograph taken from above, showing people walking in a parade. Men and women walk in lines down a paved street, with spectators watching from the sidewalks. On the right side of the frame is a “Shell” gas station. The “Parker” theater is visible in the distance (negative 6 of 17). 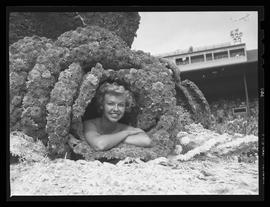 A woman smiles from a Portland Rose Festival parade float, most likely at Multnomah stadium. Her arms are folded, as she peers out from the center of a rose (negative 1 of 19). 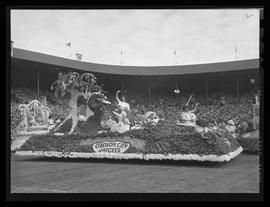 An “Oregon City Jaycees” float at the Portland Rose Festival, at the Multnomah Stadium. People on the float are dressed as matadors, with a bull made of flowers. An audience fills the stands in the distance (negative 15 of 19). 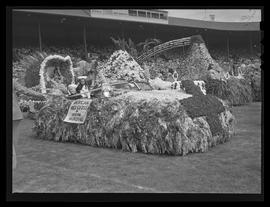 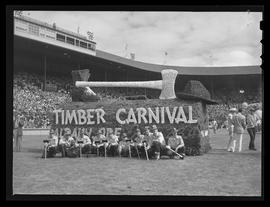 A Timber Carnival float at the Portland Rose Festival. Men is matching costumes, each holding an ax, are kneeling in front of the float. An audience can be seen in the background, at Multnomah Stadium (negative 11 of 19). 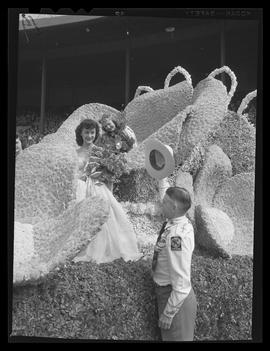 A man waves his hat at two women on a Portland Rose Festival parade float. The women are holding bouquets, and the Multnomah Stadium can be seen in the background (4 of 19). 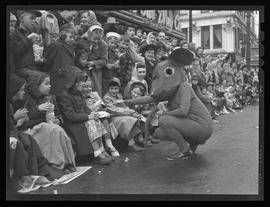 A person dressed as a mouse interacts with children during the Fairy Tale parade in Portland. The woman has her arm extended towards children seated on the curb, who are smiling. This photograph was published in the Oregon Journal on Friday, November 25, 1949 (negative 1 of 21). 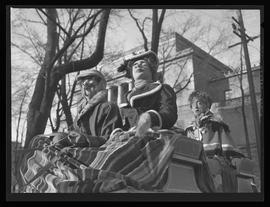 Puppets in a sleigh at the Fairy Tale parade in Portland. They’re dressed in coats, with a blanket draped across their laps. A pillared building (now part of the Portland Art Museum, at 1119 S.W. Park Avenue), can be seen in the background. Photographs from this series were published in the Oregon Journal on Friday, November 25, 1949 (negative 11 of 21). 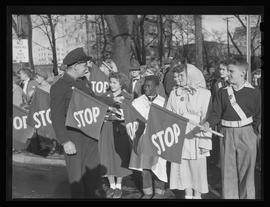 Children holding “STOP” flags at the Fairy Tale parade in Portland. A police officer looks at a young African American man, who smiles while holding a flag. Photographs from this series were published in the Oregon Journal on Friday, November 25, 1949 (negative 13 of 21). 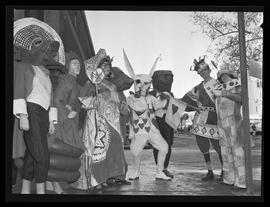 People in Alice in Wonderland costumes at the Fairy Tale parade in Portland. One person is dressed as a rabbit, holding a horn. This photograph was published in the Oregon Journal on Friday, November 25, 1949 (negative 5 of 21). 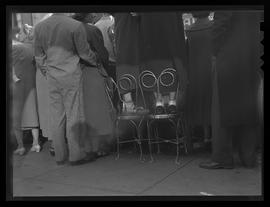 People standing on chairs to watch the Fairy Tale parade in Portland. Photographs from this series were published in the Oregon Journal on Friday, November 25, 1949 (negative 15 of 21). 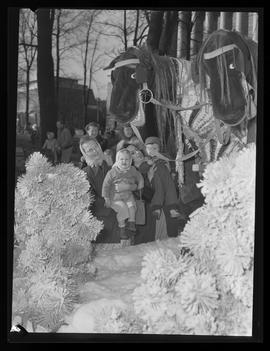 People at the Fairy Tale parade in Portland. Two women hold toddlers up towards horse costumes, which appear to be affixed to a float with fake snow and ice. Photographs from this series were published in the Oregon Journal on Friday, November 25, 1949 (negative 3 of 21). 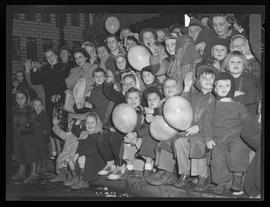 Children gathered on a sidewalk to watch the Fairy Tale parade in Portland. They wear hats and jackets, while many hold balloons. Photographs from this series were published in the Oregon Journal on Friday, November 25, 1949 (negative 9 of 21). 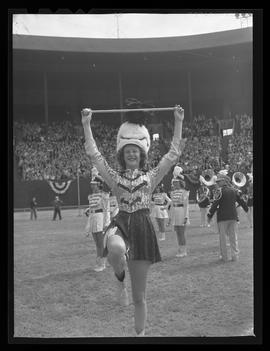 A majorette at the Portland Rose Festival holding a baton in the air. An audience can be seen in the stands at Multnomah Stadium in the background (negative 3 of 19). 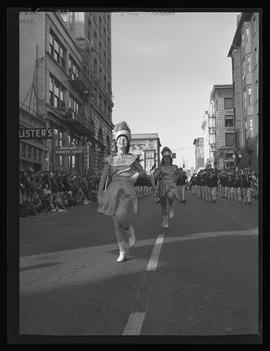 Majorettes at the Fairy Tale parade in downtown Portland. A marching band is behind them, and the street is lined with a crowd. Photographs from this series were published in the Oregon Journal on Friday, November 25, 1949 (negative 16 of 21). 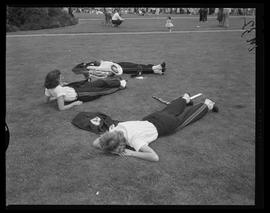 Three marching band members laying on grass with their coats off. One is laying face down with a clarinet by their feet, one is wearing sunglasses and next to a trumpet, and another with laying with their feet crossed next to a baritone horn (negative 2 of 7). 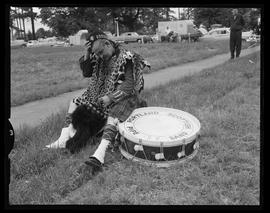 Man sitting next to drum at Rose Festival parade finish

A man sits next to a large drum. The drum has the words "Portland Scottish Pipe Band" written on it. The man is wearing a kilt and jacket with a leopard skin over the top along with a glengarry hat. (negative 1 of 7). 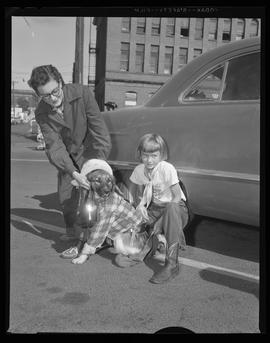 A woman holds a dog next to a car while a child tries to put a costume on it (negative 2 of 2). 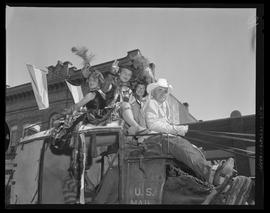 A group of people in costume ride on a U.S. Mail carriage in a parade through Pendleton (negative 10 of 12). 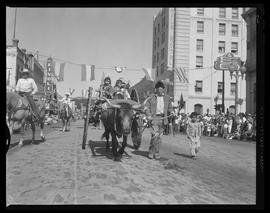 A man walks next to an ox pulling a carriage with children on it in a parade through Pendleton, OR. A small boy walks on the right side of the frame, riders on horses are on the left side of the frame (negative 2 of 12). 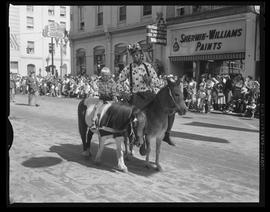 A girl riding a miniature pony waves to a crowd along a parade through Pendleton. A man dresses as a clown rights a pony to her left (negative 4 of 12). 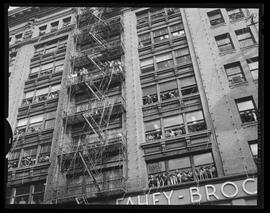 View of the face of a building in downtown Portland during a parade for President Dwight D. Eisenhower. Office workers lean out open windows and stand on fire escapes looking down at the street. Paper streamers hang from the building and are being thrown by the people inside (negative 6 of 6). 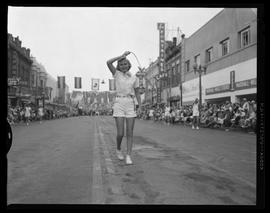 A girl marches in the Pendleton Round-Up parade in Pendleton, Oregon. She spins a lasso over her head and it spins around her body. She has a whistle in her mouth. The sidewalks on both sides of the parade are filled with spectators and flags hang above the street (negative 1 of 8).