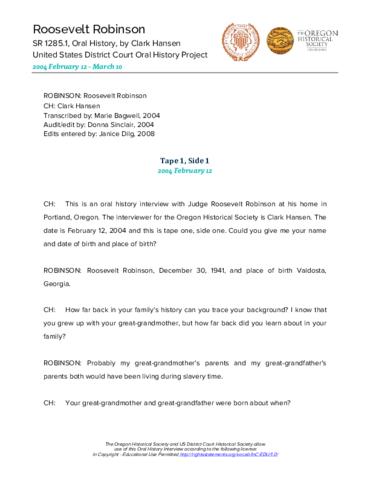 Roosevelt Robinson was born in Valdosta, Georgia, in 1941. He earned a theology degree from Southwestern Christian College in Texas before moving to Oregon in 1962. While working at the National Biscuit Company (now known as Nabisco Inc.), he met Beverlee Foreman; they married in 1963 and later had two children. Robinson also served as minister at a north Portland church and earned a sociology degree from the University of Portland in 1970. After he and Beverlee Foreman divorced that same year, Robinson gave up his plans to become a minister and instead pursued a career in law. In 1976, he graduated from Northwestern School of Law at Lewis & Clark College. He spent a few years in private practice before joining the Multnomah County district attorney's office in 1978. In 1987, he was appointed to the Oregon Parole Board. In 1990, he was appointed as a Multnomah County Circuit Court judge, later winning election to that seat. He died in 2004.

Transcript. This oral history interview with Roosevelt Robinson was conducted by Clark Hansen at Robinson's home in Portland, Oregon, from February 12 to March 10, 2004. In this interview, Robsinson discusses his family background and early life in Georgia; he describes life as a black person in the segregated South, his early education, and growing up on a farm. He talks about attending Southwestern Christian College in Texas, and moving to Portland, Oregon, after graduation. He describes working for National Biscuit Company (now known as Nabisco Inc.), racism he faced in Oregon, and his marriage to and later divorce from Beverlee Foreman. He then talks about giving up plans to become a minister and instead attending Northwestern School of Law at Lewis & Clark College. He also talks about taking the Oregon Bar exam.Robinson discusses starting his private law practice in Portland. He talks about arguing cases before Judge Gus Solomon and some of the cases he handled. He then discusses working as a Multnomah County deputy district attorney. He talks about cases he prosecuted (and a few he chose not to prosecute), and arguing against public defenders. He also discusses systemic racism in the criminal justice system. He discusses serving on the Oregon Parole Board, including some of the decisions he made. He discusses serving as a judge on the Multnomah County Circuit Court, including his appointment in 1990. He also talks about his involvement with the Oregon Bar Association, as well as numerous other organizations. He discusses cases he heard on the Circuit Court, judicial procedure, and programs to reduce recidivism. He discusses his involvement with the community court program and the drug diversion court program. He closes the interview by talking about his children, their families, and their careers; his health; and the Roosevelt Robinson scholarship fund.