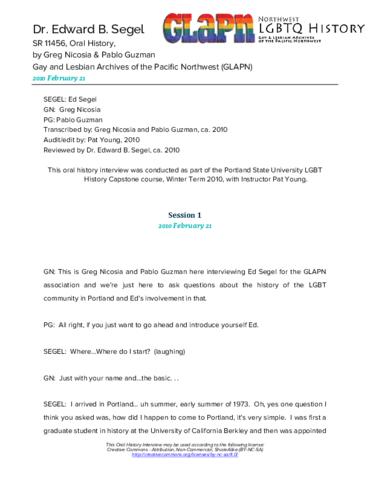 Dr. Segel is a Professor of History and Humanities at Reed College in Portland, Oregon, specializing in European diplomatic history. He was born and raised in Boston, Massachusetts, and began the process of coming out as a gay man only after his arrival at University of California, Berkeley in the mid 1960s.

Dr. Segel has been involved in numerous gay social and political organizations both in Portland and abroad, including Gay Men Together, the Right to Privacy/Pride PAC, the St. Catherine's Society, and the Cookboys, to name just a few. He enjoys writing comic verse, especially parodies of Gilbert & Sullivan, and has written lyrics for the Portland Gay Men's Chorus.

Transcript. Segel, a history professor at Reed College, discusses his knowledge of some of the local Portland non-profit organizations including Basic Rights Oregon (BRO), Love Makes A Family, Right to Pride, and Portland Town Council. Segel also discusses his experience of the AIDS epidemic, and his seeing a therapist during the early 1970s in order to come to terms with his homosexuality.