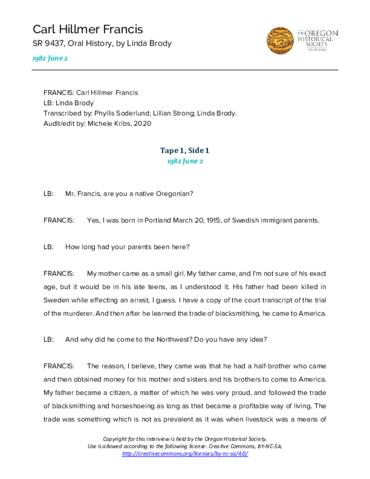 Carl Hillmer Francis was born in Portland, Oregon, in 1915, and grew up in Woodburn, Oregon. He attended Willamette University Law School, but financial difficulties led him to transfer to Northwestern College of Law. He earned his law degree in 1937 and passed the Oregon bar exam later that year. He practiced law in Dayton, Oregon. In 1939, he and Viola Brodahl were married; they later had two children. Francis was a Republican politician and served as mayor of Dayton from 1941 to 1942. He represented Yamhill County in the Oregon House of Representatives from 1943 to 1954, and in the Oregon Senate from 1955 until his resignation in 1962. In 1964, he was elected Yamhill County district attorney. Just over a year later, he returned to private practice until he was appointed to the Yamhill County District Court by Governor Mark Hatfield around 1966. He retired from the bench in 1973 and again returned to private practice. He retired from law practice in 1985. He was volunteered as a greeter for the Dayton Block House during his retirement. He died in 1995.

Transcript. This oral history interview with Carl Hillmer Francis was conducted by Linda S. Dodds in Dayton, Oregon, on June 2, 1982. At the time of the interview, Dodds' name was Linda S. Brody. In this interview, Francis discusses his family background and early life in Woodburn, Oregon, including his early education and childhood activities. He then talks about studying law at Willamette University and Northwestern College of Law, practicing law in Dayton, and serving as Dayton's mayor from 1941 to 1942. He also discusses his involvement with the Republican Party and Young Republicans. Francis speaks about his service in the Oregon House of Representatives from 1943 to 1954, and in the Oregon Senate from 1955 to 1962. He describes some of his fellow legislators, working with lobbyists, and his decision to retire from the Legislature. He speaks about his interest in history and shares tales of some of his favorite historical figures. He closes the interview by talking about Dr. Lewis Alderman.

Copyright for this interview is held by the Oregon Historical Society. Use is allowed according to the following license: Creative Commons - BY-NC-SA: http://creativecommons.org/licenses/by-nc-sa/4.0/