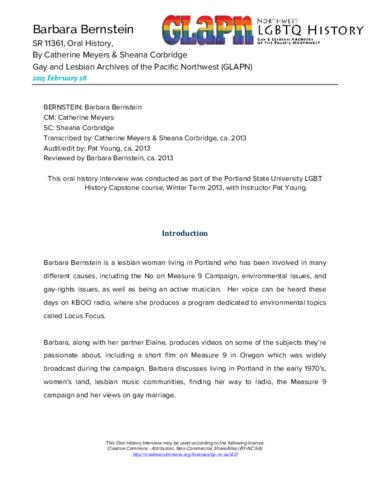 Barbara Bernstein is a lesbian woman living in Portland who has been involved in many different causes, including the No on Measure 9 Campaign, environmental issues, and gay-rights issues, as well as being an active musician. Her voice can be heard these days on KBOO radio, where she produces a program dedicated to environmental topics called Locus Focus. Barbara, along with her partner Elaine, produces videos on some of the subjects they’re passionate about, including a short film on Measure 9 in Oregon which was widely broadcast during the campaign. Barbara discusses living in Portland in the early 1970’s, women’s land, lesbian music communities, finding her way to radio, the Measure 9 campaign and her views on gay marriage.

Transcript. Barbara Bernstein discusses how she came to Portland from the East Coast, her work for birth control, the women's music movement, and her work in radio, particularly at KBOO in Portland, Oregon.