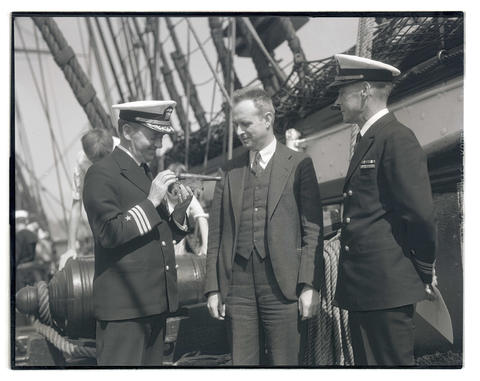 Photograph showing (from left) Commander Louis J. Gulliver, commanding officer of the frigate USS Constitution; Wallace S. Wharton, a writer for the Oregon Journal; and Lieutenant Commander Henry Hartley, executive officer of the Constitution. They are standing in a row aboard the ship, and Gulliver is smiling and holding a tiny wooden cannon. The photograph was taken in August 1933, while the Constitution and crew were in Portland for three weeks as part of a national tour. A cropped version of this photograph was one of four that were published on Page 4 of the Oregon Journal on Sunday, August 20, 1933, under the headline “No Dull Moments on Deck of Old Frigate Constitution.” This photograph had the following caption: “Wallace S. Wharton (center), staff member of The Journal, receives miniature cannon from old timbers of ship in appreciation of articles written on frigate’s visit. Presentation is made by Commander Gulliver with Lieutenant Commander Hartley looking on approvingly.” Also see image Nos. 371N3717, 371N3724, and 371N3730, which were published with this photograph.