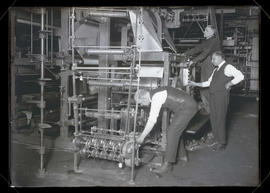 Photograph showing (from left) T. J. James, Hyman H. Cohen, and H. A. King with the Oregon Journal’s new press at the Journal Building (now the Jackson Tower) at Broadway and Yamhill in Portland. A cropped version of this photograph was one of two published on Page 18 of the Oregon Journal on Friday, February 3, 1922. The photographs were published under the headline “Journal’s Newest Press in Service Today.” The photographs had the following caption: “Two views of The Journal’s new high speed octuple press which was operated today for the first time. Its inclusion gives The Journal a battery of four presses having a combined capacity of 208 pages. Below are shown Hyman H. Cohen, market editor (center), starting the press and T. J. James, foreman of the composing room (left), removing the first paper from it. Cohen and James have been with The Journal since its establishment March 10, 1902. At the right is H. A. King, veteran press room foreman.” The photographs accompanied the continuation of a front-page story about the new press. 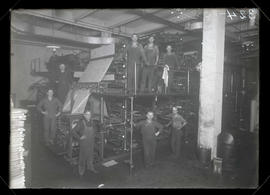 Full-length portrait of eight unidentified Oregon Journal pressmen with the printing press at the newspaper’s offices in the Journal Building at Broadway and Yamhill streets (now Southwest Broadway and Southwest Yamhill Street) in Portland. The man standing in front of the press at lower left may be H. A. King, press room foreman. This photograph may be related to image No. 373G0460. The number 122 is written on the negative and is visible in the upper right corner of the image. The number 324 was also written on the negative and then crossed out. 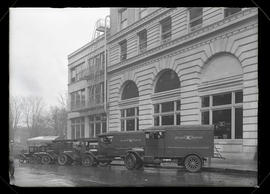 Photograph showing Oregon Journal trucks parked outside the newspaper offices in the Journal Building (now the Jackson Tower) at Southwest Broadway and Southwest Yamhill in Portland. The trucks are on the Yamhill side of the building. 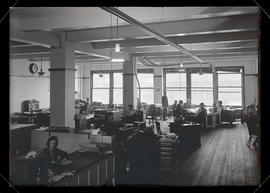 Photograph showing Oregon Journal staff at desks in the newspaper’s offices at the Journal Building in Portland. The building, now known as the Jackson Tower, is located at Southwest Broadway and Southwest Yamhill Street. The windows in this photograph probably overlook Broadway.