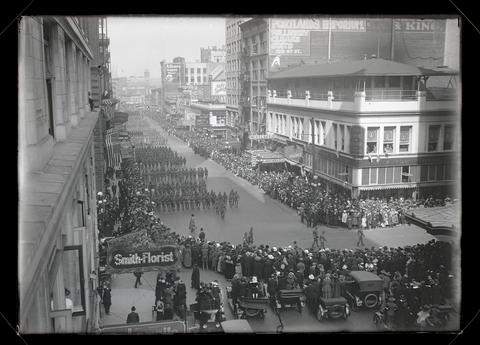 Photograph showing troops marching in formation past crowds of spectators on Sixth Street (now Southwest 6th Avenue) in Portland. The photograph was taken during the War Activities parade on Saturday, April 6, 1918. The parade was among events marking the issuance of the third Liberty Loan bond to finance the war effort during World War I. A cropped version of this photograph was published on the front page of the Oregon Journal city edition on Sunday, April 7, 1918. The photograph had the following caption: “The Multnomah Guard, Lieutenant Colonel John B. Hibbard commanding, made its first public appearance in War Activities parade Saturday.” The photograph accompanied a story headlined “Big Pageant Wins Cheers Of Throngs.” See related image Nos. 376G0308 and 376G0310.