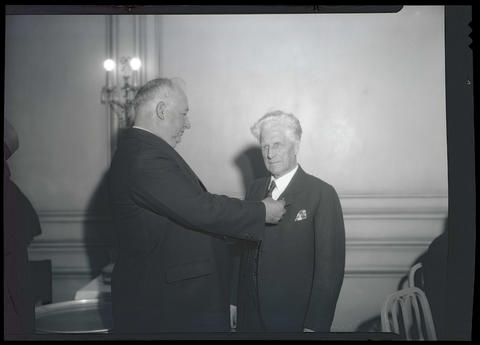 Photograph showing Multnomah County Sheriff Martin Pratt (left) pinning a badge (not visible) to the lapel of Oregon Journal editor Benjamin Franklin Irvine. A cropped version of this photograph was published on Page 21 of the Oregon Journal on January 22, 1932, under the headline “Sheriff of 36 Counties.” The photograph had the following caption: “B. F. Irvine, editor of The Journal, being presented with a gold star by Sheriff Martin Pratt, making him an honorary deputy sheriff in all of Oregon’s counties, in appreciation of his work in supporting peace officers.” Image note: The name “B. F. Irvine” is written on the negative and is faintly visible at the bottom of the image.