7830 Collections results for Multnomah County (Or.) 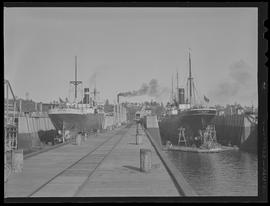 Two ships, with Russian names, on a dry dock in Portland. A long wooden pier can be seen between the two ships, leading into the distance towards a hillside with houses on it. The propellers of both ships can be seen out of the water, next ladders of differing heights (negative 3 of 5). 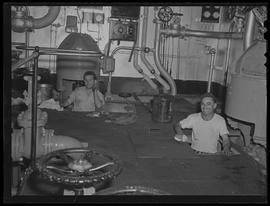 Photograph showing two crew members of the cargo ship Mormacsea. Both men are facing towards the camera, and standing in sunken areas of the floor in what appears to be a machine room. Pipes, levers and wheels can be seen along the walls and in the foreground of the photograph. During WWII, the Mormacsea later served as a troopship (negative 1 of 22). 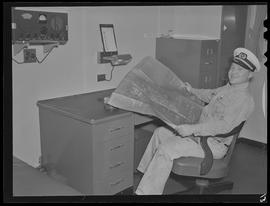 A man sits in front of a desk with both arms extended, holding what appears to be a schematic drawing. His pants and collared shirt are stained, and he is wearing a hat with an embroidered “M” on the front. During WWII, the Mormacsea later served as a troopship (negative 10 of 22). 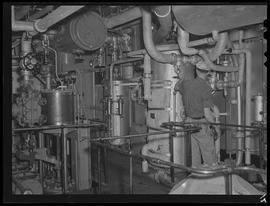 A man faces away from the camera and towards a set of pipes and wheels, in what appears to be a machine room aboard the Mormacsea. He has his left arm raised and is turning a wheel. Other pipes and pieces of machinery can be seen throughout the frame. During WWII, the Mormacsea later served as a troopship (negative 11 of 22). 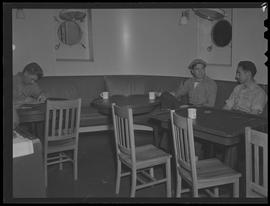 Three crew members of the cargo ship Mormacsea, seated at tables in a dining area. Two of the men are seated together, while a third is at a separate table and is writing something on paper. Open portholes can be seen behind the seating area. During WWII, the Mormacsea later served as a troopship (negative 4 of 22). 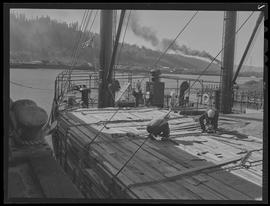 Crew members aboard the cargo ship Mormacsea, seen in front of the Willamette river (?). Two men on the deck stand on top of a pile of cut wood, which is stacked and lashed together with chains. Piers and industrial warehouses can be seen across the river. During WWII, the Mormacsea later served as a troopship (negative 16 of 22). 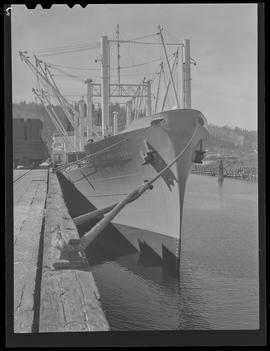 Photograph showing cargo ship Mormacsea, moored to a wooden dock by several visible ropes. “Mormacsea” is painted on the side of the vessel, and a train car of goods can be seen to its left, on a set of tracks. The Willamette River (likely) can be seen to the right, with industrial buildings and docks in the distance. During WWII, the Mormacsea later served as a troopship (negative 21 of 22). 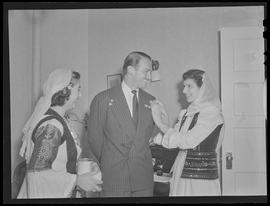 Douglas Fairbanks Jr., actor and producer, with two Greek women. He is turned towards and smiling at one woman, who appears to be placing a pin on his jacket. Fairbanks visited Portland as a featured speaker for the democrats’ Jackson Day dinner (negative 1 of 2).

Three men stand aboard the cargo ship Mormacsea. Below the group is a large sign reading “Mormacsea”, which is attached to the front of what appears to be a windowed room. One of the men is wearing a captain’s uniform and hat. During WWII, the Mormacsea later served as a troopship (negative 8 of 22). 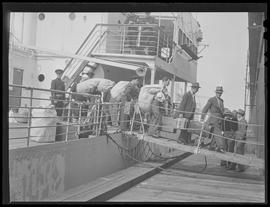 Crew members of the Italian ship Leme disembarking down a gangplank, after being taken over by the United State Coast guard. Several men carry cloth bags over their shoulders, while men in uniform watch (Coast Guard?). Behind the gangway is ship balcony, where two men in uniform watch the group disembark. The members of the crew were taken into custody after it was discovered that the machinery and navigation equipment of the Leme had been intentionally damaged (negative 2 of 18). 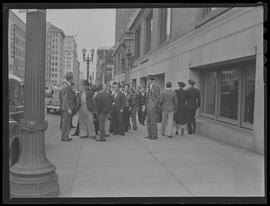 Crew members of the Italian ship Leme stand outside the Multnomah County Jail, after being taken into custody by the United States Coast Guard. The decorative columns of the Multnomah County Courthouse on SW 5th Avenue can be seen to the right of the group, with the view looking towards the north towards NW Salmon Street (negative 1 of 4). 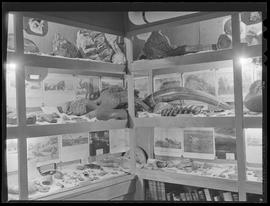 A corner fossil display at the home of Alonzo Hancock, at 2704 SE 84th Avenue. Labels on the shelves read “Pliocene,” “Pleistocene,” “Triassic,” and “Jurassic.” Behind the fossils, pieces of paper with depictions of dinosaurs are pinned to the walls (negative 3 of 9). 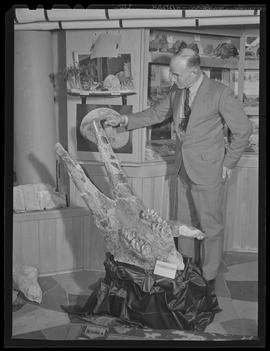 Postman and fossil collector Alonzo Hancock, at his home at 2704 SE 84th Avenue. He is wearing a suit and tie, and is leaning downward towards the large skull, which is on a cloth draped stand and includes a tag reading “Tetrabelodon.” Other fossil displays can be seen behind him in a wooden case (negative 1 of 9). 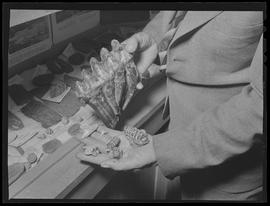 Postman and fossil collector Alonzo Hancock holds a set of fossils in both hands, at 2704 SE 84th Avenue. In his left hands are several small fossils, while he holds a larger specific in his right. He is standing in front of a wooden shelf holding numerous other fossils (negative 4 of 9). 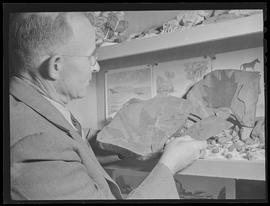 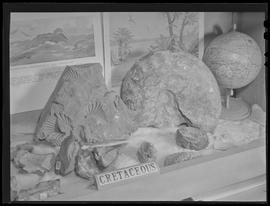 Fossils at the home of postman and collector Alonzo Hancock (2704 SE 84th Avenue). The specimens are laying on a padded shelf, with a tag that reads “Cretaceous.” Smaller identification tags are attached to many of the small fossils, and a world globe can be seen next to a large fossilized shell (negative 9 of 9). 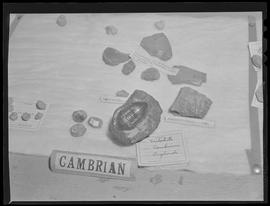 Fossils at the home of postman and collector Alonzo Hancock (2704 SE 84th Avenue). The specimens are laying on a padded shelf, with a tag that reads “Cambrian.” Smaller identification tags are attached to many of the small fossils (negative 7 of 9). 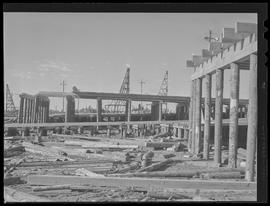 Photograph showing logs and timber being used to construct raised decks at Oregon Shipbuilding Corporation. Logs can be seen laying on the ground throughout the frame (negative 1 of 16). 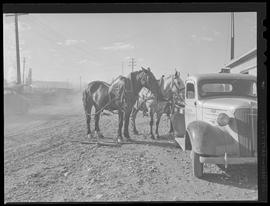 Two workhorses at the Oregon Shipyard Corporation during construction. They are standing next to a truck with “Gilpin construction” painted on the side. Wood and other construction materials can be seen in the background (negative 10 of 16). 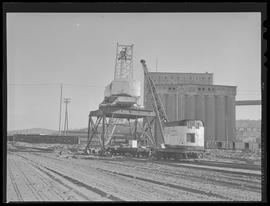 Equipment on railroad tracks at Oregon Shipyard Corporation during construction. A crane on a train car with “Hauser Construction Co.” on the side can be seen next to be another crane set on a wider train track. A tall industrial building is behind the cranes, with “Terminal No. 4” written across the top (negative 11 of 16). 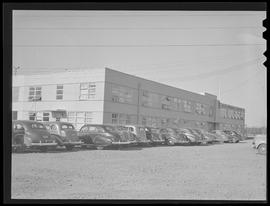 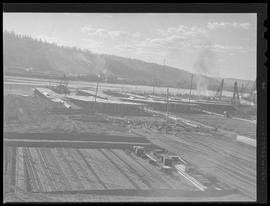 Photograph taken from a high vantage point and looking down towards a construction area for the Oregon Shipbuilding Corporation. Raised docks, piles of lumber, and cleared dirt areas can be seen throughout the site, with the Willamette River in the background (negative 3 of 16). 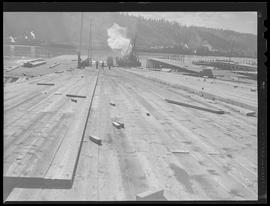 Construction of a wooden dock at the Oregon Shipbuilding Corporation. The photograph is looking down laid wooden planking towards the Willamette River, where a group of men stand. Industrial facilities and smoke stacks can be seen at the opposite side of the river (negative 4 of 16). 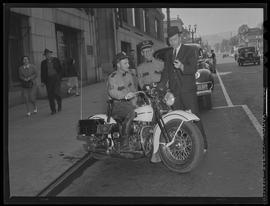 A police sits on a Harley Davidson motorcycle, which has recently been equipped with a handheld radio. Another police in uniform, and a man in a suit and hat stands next to the motorcycle, the latter of which is holding the radio in one hand. The photograph is looking north on SW 5th Avenue, likely towards SW Madison Street, with Portland City Hall visible in the distance (negative 1 of 2). 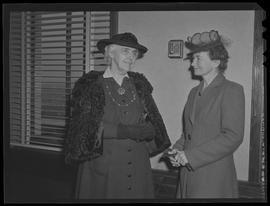 Lou Henry Hoover, wife of Herbert Hoover, standing with a woman wearing a jacket and decorative hat (negative 2 of 2). 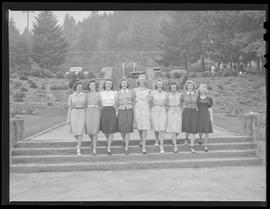 A group of young women, serving at 1941 Rose Festival princesses, walk in a line down a set of stairs. They are all wearing dresses, and have their arms looped around the waist of the woman next to them (negative 8 of 8). 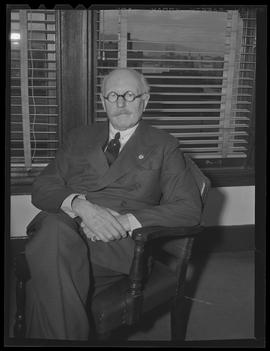 Portrait of British diplomat Sir Henry Chilton, seated on a chair with legs folded. He is wearing a suit, tie, and glasses (negative 1 of 2). 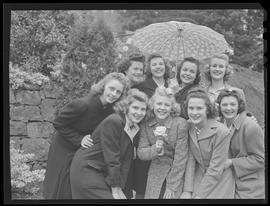 A group of young women, serving at 1941 Rose Festival princesses, pose as a group under an umbrella. They are all wearing long coats and jackets, and the woman at the center of the group is holding a single rose (negative 1 of 8).