Item 372A0719 - Mrs. O. W. Ransower and others looking at remains of home destroyed by wildfire in Bandon, Oregon 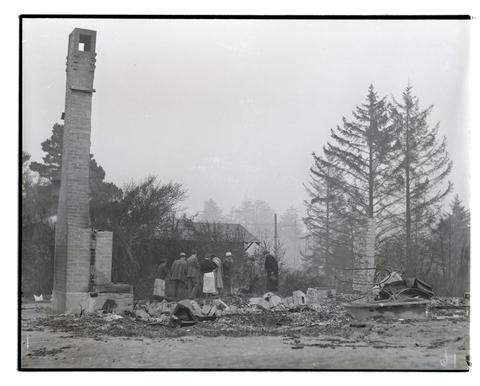 Mrs. O. W. Ransower and others looking at remains of home destroyed by wildfire in Bandon, Oregon

Photograph showing a group of people at the site of a burned home in Bandon, Oregon, after the town was destroyed by wildfire on Saturday, September 26, 1936. The building’s chimney remains standing at left. Just visible in the background is the roof of a building still standing. A cropped version of this photograph was one of seven that were published in a spread on Page 18 of the Oregon Journal on Wednesday, September 30, 1936. The photographs were published under the headline “Tents Replace Ruined Homes as Bandon Citizens Prepare to Rebuild Where Fire Wiped Out City.” This photograph had the following caption: “Mrs. O. W. Ransower inspects ruins in her ‘best’ house while the smaller one stands unharmed, the only home left in South Bandon.” Also see image Nos. 372A0720 and 372A0723, which were published on the same page as this photograph. Image note: The number 16 is written on the negative and is visible in the lower right corner of the image.