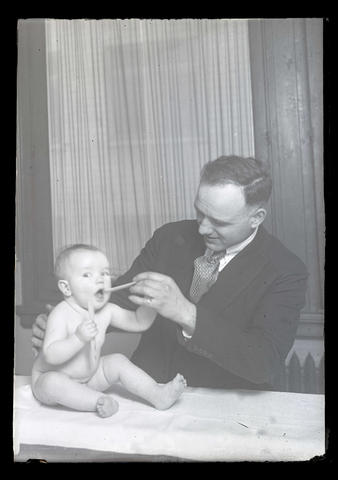 Photograph showing an unidentified man examining an unidentified baby during a eugenics test at the Multnomah County Courthouse in Portland in April 1920. The man is holding a tongue depressor toward the baby’s open mouth. A cropped and reversed version of this photograph was published on Page 12, the Mother’s Forum, of the Oregon Journal city edition on Monday, April 12, 1920. The photograph had the following caption: “One of the several examinations given in the eugenics tests made at the Parents’ Educational bureau, 551 courthouse, every Wednesday. The tests are for mental and physical defects and advice is given for their correction.”