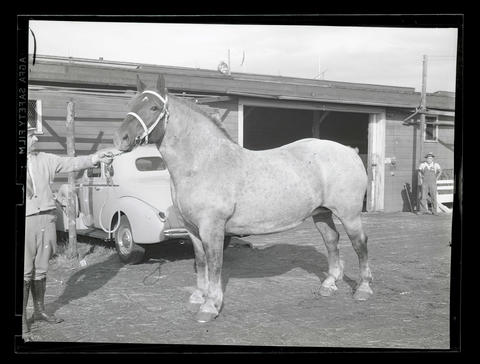 Photograph of a horse standing near a building and parked car at the 1938 Pacific International Livestock Exposition. An unidentified man who may be Luther Harrel is holding the horse’s lead rope. A cropped version of this photograph was published on Page 6 of the Oregon Journal on Tuesday, October 4, 1938. The photograph had the following caption: “Harrel’s Jupiter Darling, 3-year-old Belgian mare, many times a champion, again judged grand champion mare of her breed at Pacific International exposition. She is owned by Luther Harrel of Ellensburg, Wash.” Jupiter Darling was also mentioned in an article on Page 3 of the October 4 edition, titled “Harrel Belgian Mare Grand Champion.” The man in this photograph may also be pictured in image Nos. 374N1104, 374N1106, 374N1110, 374N1171, and 374N1173.