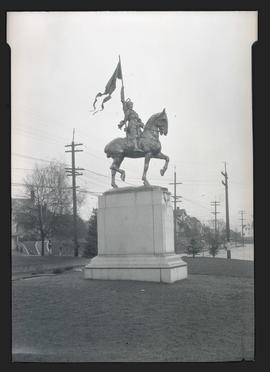 Photograph of a bronze statue of Joan of Arc on a horse. The figure is wearing armor and is holding a flag in one upraised arm. The statue is a casting of a sculpture in Paris by by Emmanuel Fremiet. The statue was a gift to the city from Henry Waldo Coe, who commissioned it as a monument to American forces who served in World War I, and it was placed in Coe Circle, at the intersection of what is now NE Cesar Chavez Boulevard and NE Glisan Street. The statue was dedicated on May 30, 1935. A cropped version of this photograph was one of 13 that were published on Page 1, Section 2, of the Oregon Journal on Sunday, March 10, 1929. The photographs were part of a “motorlog” describing a car trip around Portland to view public art. The spread included photographs of the statues and the car driven on the trip; a map of the route; and a story, headlined “Memorials Grace City / Notable Works of Art Adorn Parks and Plazas of Portland, as Motorlog Shows.” The photographs were published under their own headline and subheading: “Portland’s Statues Viewed Via Motor / Delightful Drive in Reo Flying Cloud over Route that Includes Locations of Twelve of Portland’s Art Treasures.” The tour began and ended at the Journal Building at Southwest Broadway and Yamhill in downtown Portland. The Joan of Arc statue was stop number 10 on the trip. See related image Nos. 371N5421, 371N5422, 371N5461, 371N2898, 371N2899, and 371N2901, which were also part of the spread. 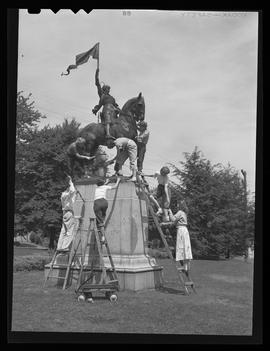 A group of young people cleaning a Joan of Arc statue at Coe Circle in Portland. Several women are on top of the statue, with a bucket and scrub brushes, while several others stand on ladders below. Graffiti can be see on the side of the statue base (negative 1 of 3).