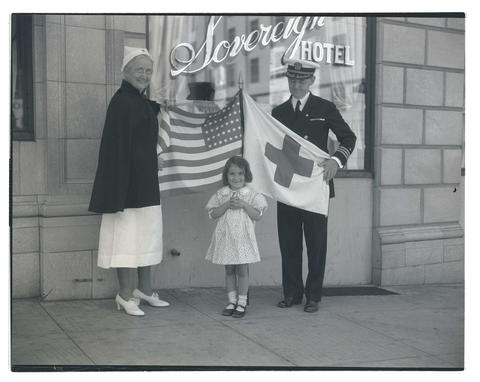 Photograph showing Jane V. Doyle, executive secretary of the Red Cross in Portland; her grandniece, Pamela Ann Parrish, and Commander Louis J. Gulliver, commanding officer of the frigate USS Constitution, outside the Sovereign Hotel in Portland in early September, 1933. Doyle and Gulliver are holding up a United States flag and a Red Cross flag, respectively, and Parrish is standing between them. Gulliver joined the Portland Red Cross as part of its membership drive, which officially began at the end of September 1933. Gulliver had recently visited Portland aboard the Constitution in August 1933, during the ship’s national tour. See related image No. 371N3733.