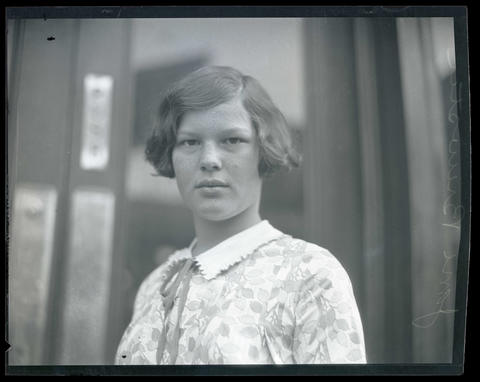 Portrait of a young woman wearing a collared dress or blouse. The name “Jane Brewster” is written on the negative and is visible on the right side of the image. A cropped version of this photograph was published on Page 1 of the Oregon Journal on September 26, 1929, next to a photo of a boy. The two photos were published under the headline "Here's Healthy Pair," and had the following caption: “Jane Brewster, 13, and Kenneth Cliff Jr., 11, both of Irvington school here, who took first honors in the health contest at Salem state fair. Jane scored 999 and Kenneth scored 1000, so they are pretty well, thank you. The photographs accompanied a story about Brewster and Cliff, headlined “2 Portland Youngsters Healthiest.”