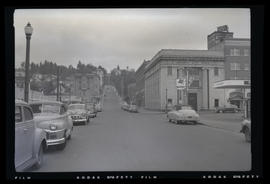 Negative of a photographic postcard showing a street scene in Astoria, Oregon. Astoria City Hall is on the right, and there are signs for the Merwyn Hotel, the Hotel Arlington, Mobilgas, and other businesses. Several automobiles are parked on the street. Handwritten note on envelope reads, "Street Scene. Astoria, OR. 1952."